The sphere of public transportation services in Australia is undergoing a transformation in response to a change in demographics that requires inter-modal integration and major infrastructure investment by the Federal government. To better address new challenges, public transport companies need to understand the behavior of their networks from the customer’s point of view. Widespread use of smart cards at public transport allows them to collect the information needed to conduct such research.

The public transportation company employed PwC Australia to develop a solution that could provide a customer-centric view of their railway infrastructure and help the company understand the current incident effects on rail network operations and how to improve the situation. Specifically, the company wanted to:

PwC consultants decided to build a model of the transportation network that would simulate train movements, incidents, and customers at stations and in trains.

To build the model, the consultants chose AnyLogic software due to its ability to combine various simulation methods in one model, which was needed to successfully model both train movements (discrete event modeling) and customer behavior (agent-based modeling). The second reason was its scalability: in AnyLogic, it is easy to extend an existing model to adapt it to network development plans and see how the system would work in a new setting.

The input data for the model was obtained from various sources, including the transportation company, government, and publicly available sources, and comprised of:

What is more important, the model was designed to allow the company to analyze network’s incident recovery behavior and time. If an incident occurs at a railway, it may cause a long-lasting delay in the timetable, especially during rush hours. It may take several hours for the network to fully recover from the incident and for all the trains to start running on schedule after the initial problem is solved. That is why it was essential for the model output to include a Network Incident Graph that clearly showed the length of the effect of each incident on the whole network and enabled the users to test and compare different incident mitigation policies.

The main metric collected was Lost Customer Minutes (LCM), calculated as sum of delay minutes for all individual journeys within a particular train or a network segment. It was important to review LCM in the context of situations when these minutes were lost (e.g. minutes lost during a rush hour and a weekend had different values).

The output included the train graph, which is a conventional way of representing train movement in a network (see picture). Moreover, the consultants animated the model using a GIS map to visually present the processes occurring in the system. The train graph and network animation showed:

The model allowed the users to obtain a passenger-centric lost customer minutes calculation, which is more precise than traditional train-centric methods that either seriously over- or underestimate LCM. This passenger-centric approach was possible due to the use of agent-based simulation.

The clients were able to measure impact of incidents on the network behavior to test and form policies for more efficient incident mitigation (e.g. setting up emergency teams dispatched at certain locations for quick medical help to minimize delays related to passengers’ health conditions). It also helped plan incident response prioritization policies according to the number of passengers affected. With the help of the simulation model, the users could evaluate their investment and business decisions according to their estimated impact on lost customer minutes.

Future consultants’ works include extending the model with other forms of transportation and future network elements. They also plan to simulate physical movements of passengers as pedestrians at stations to investigate problems of platform crowding. 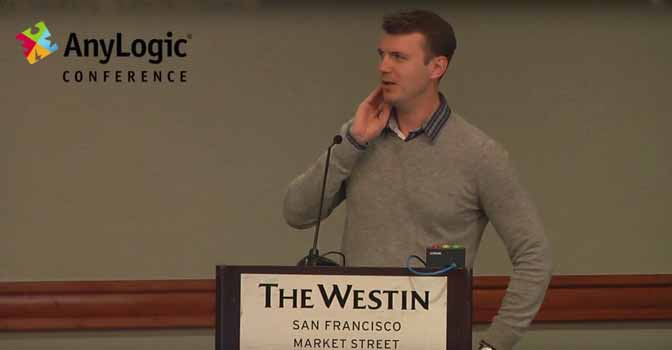