We all take commercial air flights from time to time. However, less well known is how complex plane maintenance can be. The military aircraft turnaround process (the time between an aircraft touching down and being ready to fly again) is even more complex and includes multiple interactions and parallel workflows. In addition, skilled staff are needed to maintain a sustainable level of aircraft turnaround, which leads to associated costs.

Engineers from Lockheed Martin, one of the largest companies in the aerospace, defense, security, and technologies industry, used AnyLogic simulation software to improve decision making for the whole military airplane turnaround process and to evaluate the impact of process changes on aircraft turnaround time.

For a complete model, the three main elements of the turnaround time process had to be considered:

Once these processes were clarified, a mobile application was designed to enable the recording, validation, and understanding of each process at every stage of maintenance. This data collection tool was used by observers who monitored the maintenance staff. The application was modified several times over the course of the project to refine its operation.

For each step in the workflow the actors, resources, dependencies, and other process definition data were identified. The data needed for the model included the start and stop times of each task. In addition, it was important to provide an audio recording capability to capture activities that were not otherwise provided for in the application. For example, observers might record the reason that a task was taking longer than expected, or record that they had accidentally pushed the wrong start button. It made the data collection application highly flexible and adaptable.

Studying the aircraft turnaround process revealed that the modeling and simulation environment should include experimentation and presentation capabilities. AnyLogic simulation software fulfilled these requirements and had already successfully fulfilled aerospace projects. Additionally, the process visualization possibilities allowed the model details to be presented to all levels of developers and senior management. These visualization abilities are highly valued in the aerospace and defense industry.

Following the process capture stage, the agents, resources, and tasks were modeled and in a process flow using AnyLogic simulation software, including the creation of multiple visualizations.Baseline models of the current processes were then built. These were iteratively run in a deterministic mode for debugging purposes, and also as single and multi-run Monte Carlo modes. The outcomes were compared to what had been experienced previously on site.

After validating and updating, a stochastic agent-based model was able to capture the dynamic and interacting processes that comprised the turnaround process. To make the process more efficient, experiments were performed to quantify the impact of process changes, whether through the deletion of process steps, a reduction in the amount of time needed to execute a process step, or the redefinition of process sections.

Various experiments with the model, including with the Monte Carlo method, resulted in suggestions that showed which process modifications would make the most difference. AnyLogic helped model the people/machine/workstation interactions, and also revealed workflow peculiarities that had been unknown before the experiment, including:

This new information and the testing abilities, enabled with simulation, let engineers identify and understand the bottlenecks in the turnaround process. The resulting proposals and modifications to the workflow, brought sizable improvements to the airplane turnaround process, proving the project, and simulation modeling, a success. 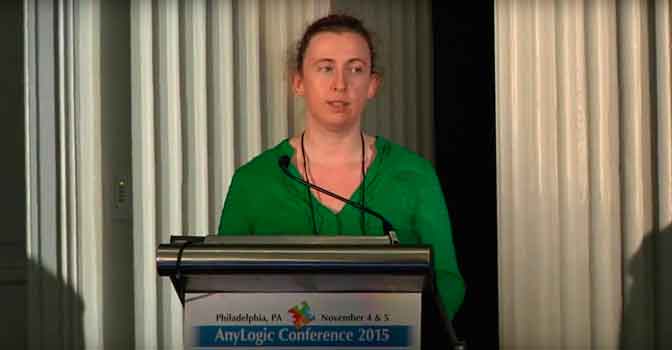