Fair Dynamics, a Milan based consulting company with a distinct aspect towards simulation modeling, was engaged in developing The Ametria project, a contemporary art exhibition held in the Athens’ Benaki Museum.

The general purpose of the project was to steer visitors’ attention by designing brand new personal experiences and novel curatorial approaches at the exhibition. To achieve that, they created a maze-like area in the museum, instead of ordinary canvas filled rooms, to affect the visitors’ moods. The contractors were supposed to provide a layout where artworks would be placed in hidden areas, so that it would be difficult to find them. That’s where AnyLogic simulation modeling was advantageous. It let engineers see where the artworks could be placed, as well as show how people could move inside the gallery.

Different layouts were tested, including:

The movement of visitors inside the gallery was modeled with the help of the AnyLogic Pedestrian library. This library allowed modelers to simulate the behavior of agents (representing visitors), moving according to predetermined rules, and adjust distance and speed according to the crowd density.

Thanks to the library, it was possible to join the advantages of pedestrian dynamics with the power of the agent-based modeling approach, providing visitors with specific features and behaviors, and allowing visitors to interact with artworks. This approach helped define:

In the end, engineers were able to reproduce the behavior of a person, roaming inside an area they didn’t know, with some simple goals to be reached, but with no specific supports on how to reach them. It should be mentioned that the agents’ parameters were taken from surveys of people who visited other galleries, to make the model more accurate. The visitors’ walkthrough is described below:

The last step deserves greater attention. According to exhibition organizers, it was vital to consider visitors' specific features, including, preferences, goals, interest in the exhibition, mood, and others. It also implied that spending too much time without observing artworks moved a visitor to a progressive state of dissatisfaction that, at its maximum peak, forced them to exit the gallery.

The contractors paid particular attention to the model’s interface. Providing a high level of usability, it had a material-design look, was easy to read, and had adjustable performance indicators. 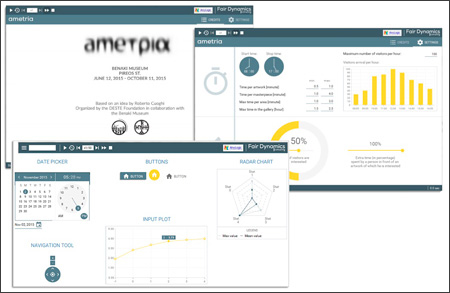 This was achieved through the flexibility of AnyLogic in integrating the components, provided by the Java Swing class. Most of the interface elements were easily adjustable, so the clients could introduce any dynamic input parameters or empirical data into the model, including:

After setting up and launching the model, one could see people entering the hall. When people started observing a particular artwork, represented as a dot, it changed color. Visitors tried to complete the gallery, following behavior patterns (involvement degree, mood, goals, etc.). While people were moving, the legend on the left describes what was going on in the gallery.

Thanks to the density map provided by AnyLogic, it was possible to look into the people saturation of the entire area. The model also allowed enhanced statistics, including the following: 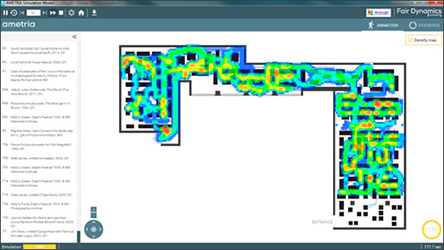 Not only did AnyLogic agent-based simulation modeling help relocate the paintings and showcase the exhibition layout, but it also provided detailed statistics for each agent/group of agents (both artworks and people inside the halls). It also determined the reasons for crowdedness in front of particular paintings, which allowed the designers to eliminate them using a density map. Apart from this, the model allowed the customer to test various layouts to find a suitable one for future exhibitions.

Much was done to make the model more customer oriented. The contractors tried to improve the user experience through intuitive interface, visual indicators, and documentation tools. For instance, organizers could gather multiple pathways’ information to produce 1000 different exhibition booklets.

The model also offered the possibility to test the maximum number of visitors that could concurrently visit the exhibition, avoiding overcrowding problems. This feature helped in modeling a plan for safe evacuation. 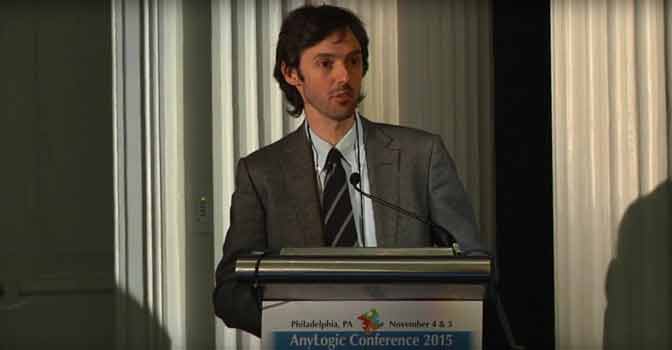